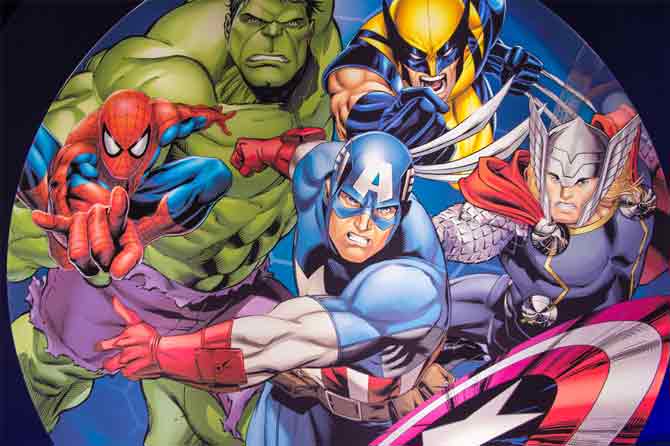 Marvel Comics, the home of such legendary characters as Spider-Man, Captain America and the X-Men, has a long and storied past.

With the creation of the Fantastic Four in 1961 and the Incredible Hulk in 1962, Marvel Comics was fast on its way to creating an entirely new style of comic book

One of the things that quickly set Marvel Comics apart from all others was their adherence to continuity. Their characters lived in the same world and interacted with each other regularly.

The Sub-Mariner was revived for Fantastic Four #4 where he battled the new Human Torch (as he had the original in the first comic book crossover). Stan Lee and Jack Kirby kept the establishment of a shared continuity going when in issue #12 the Fantastic Four were called in by the US military to deal with the newly created Hulk.

Under the distribution agreement that Marvel’s publisher Martin Goodman held with DC Comics, Marvel could only publish eight titles a month. Most of those titles were still monster books and the monster genre had outlived its popularity. Lee decided to change the books into new Superhero books. His first choice was Journey into Mystery.

Lee wanted the new hero to be bigger and grander than anything before. He decided that the only thing that could beat his superheroes would be a “super-god”. Not wanting to offend anyone’s religious convictions he went to the well of mythology. Reasoning that Greek and Roman myths had been pretty well plundered he decided to dive into a grand mythos that was entirely untapped, the Norse myths, and Thor was born.

Thor was created to be the greatest of all Marvel’s characters, but the intention didn’t meet the attention given him. Lee was busy working on other ideas so he passed the writing chores onto his brother Larry Lieber. It wouldn’t be until a couple of years later, when Lee and Kirby together took on the thunder god, that Thor would realize his full potential.

There Goes the Spider-Man

The same month that Marvel Comics introduced Thor, they introduced a character that was his virtual opposite—Spider-Man. Lee had long wanted to do a comic book where the hero was a teenager. He’d gotten a taste of it with the Fantastic Four’s Human Torch, but since he’d started in comics the idea that a super-powerful teen could do just as much as an adult counterpart had been dear to him. Spider-Man was the embodiment of that idea, go to this web-site.

It almost didn’t see print. According to Lee’s book “Origins of Marvel Comics”, when he brought his idea to Goodman he was told “…people don’t like spiders…Spider-Man would merit somewhat less than the reading public’s whole hearted, enthusiastic approval.” Luckily for Marvel and comics fans everywhere another of the monster books, Amazing Adult Fantasy, was set to be canceled with issue # 15.

Lee decided to do a throwaway story about Spider-Man so that he could finally do the idea and get it out of his system. He teamed with the book’s regular artist Steve Ditko to create a teen superhero who was a ball of insecurity and teen angst. The story was a runaway hit, and Spider-Man quickly became the hottest property in Marvel’s growing stable of superheroes.

Not every Marvel Superhero hit pay-dirt. One great example is Ant-Man, the scientist who learned to shrink himself and command ants. The hero never caught on with fans, even after he was given an attractive female partner to liven him up, and his series Tales to Astonish failed to garner impressive numbers.

I Am Iron Man

Lee’s next character, however, was another success. A millionaire industrialist who dons a suit of super armor to keep his damaged heart beating and help him escape from communist Vietnam, Iron Man was a hit. He seemed to embody the spirit of hopefulness that America itself was feeling at the beginning of the sixties.

If the Hulk was a cautionary tale of the dangers of the atomic age, then Iron Man was a reinforcement of the belief that American technology and industrial know how would always keep us strong. Yet within his suit Tony Stark was still the most fragile and human of all of Marvel’s characters.